Can Cannabis help to Treat Alcoholism?

Can Cannabis help to Treat Alcoholism? 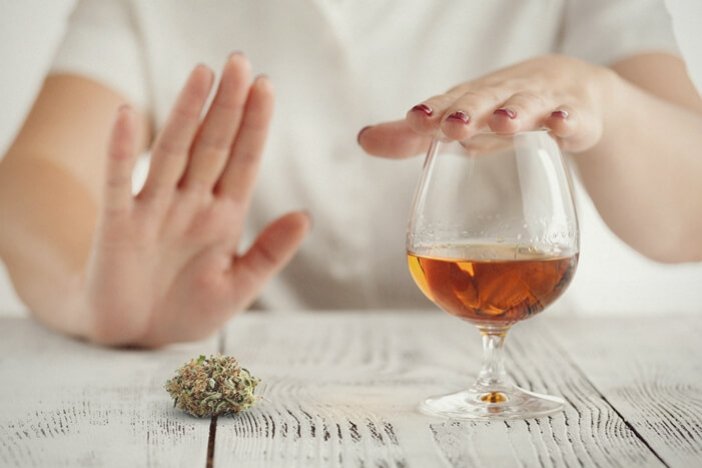 Many recovering alcoholics are now resorting to medical marijuana as a means of treating their alcohol addiction. The controversial step of substituting marijuana with alcohol is gaining in popularity and in spite of all the taboo associated with cannabis, it has been proved to be significantly less addictive than nicotine, cocaine and of course alcohol. Several studies are being carried out on cannabis and alcohol addiction and many of them have corroborated the fact that CBD can greatly help to reduce the craving for alcohol and the associated anxiety among recovering alcoholics. In today’s post, we are going to talk about the pros and cons of cannabis management for alcohol abuse and also discuss a few great strains which can help you in this regard.

Some critics of cannabis are of opinion that a harmful substance like alcohol shouldn’t be replaced with another addictive substance like cannabis. According to the detractors, the practice of cannabis management for alcohol abuse is like replacing one bad habit with another. However, it needs to be mentioned in this context that alcohol addiction leads to over two million deaths every year all over the world, while nobody ever has overdosed on marijuana alone.

Another downside of using cannabis for alcohol addiction according to the detractors is that weed might aggravate the mental health issues often present in people with alcohol dependence.

Although the topic is still debated, some claim that cannabis can act as a gateway drug contributing to dependence on more harmful drugs like heroin, and cocaine.

Lastly, it has been argued that cannabis and alcohol addiction don’t go well together because weed therapy entails the risk of making the user dependent on cannabis. Again it needs to be mentioned that just a meager 10%- 20% of daily marijuana users become dependent on the herb.

The efficacy of Alcoholics Anonymous (AA) programs is a matter which can be debated. Most alcoholics who have attained sobriety after a thorough AA program believe that their successful sobriety is a result of attending the Alcoholics Anonymous meeting rather than the 12 step program advocated by AA. It has been found that most alcohol users who fail to get out of the habit of alcohol dependency have not regularly attended the meetings.

Supporters of cannabis management programs believe that cannabis can be of great help for patients on whom the abstinence-based programs don’t work well. According to them, marijuana can be of immense help in tapering off alcohol addiction rather than going cold turkey one fine day. Moreover, weed can also help to counter many of the negative side effects of sudden detoxification.

It also needs to be said that our society has demonized this wonder herb for centuries and the stigma associated with pot smoking hasn’t still completely abated. This is why we shouldn’t pay much heed to people who talk about how weed can affect our mental health and lead us to try other hard drugs.

Weed has far less negative impact on health and recent researches prove just the contrary. Unlike booze which has zero health benefits, cannabis benefits is often prescribed for stimulating appetite, curbing stress and depression, enhancing mood and relieving pain. So these medicinal properties of weed can be priceless for people who are suffering the torments of alcohol recovery.

Many scientists recommend the use of CBD as a potential tool against alcohol and even drug use. We present you with a list of 5 CBD heavy weed strains that can enormously help you combat your alcohol dependency.

This complex strain which has been named after Lawrence Ringo, the CBD pioneer and marijuana activist, is a cross of Harle Tsu and ACDC. With a negligible THC level of 1% this one can be safely used by recovering addicts without the slightest fear of paranoia or anxiety. Ringo’s Gift helps to enhance your focus, mood and energy which are the precise reasons why it can be so useful for recovering addicts.

This balanced, potent and super flavourful strain is a cross of White Widow and Super Sour Diesel. The best part about SSW is that it is totally devoid of any negative effects. Although it comes with a generous THC level of 15% to 18%, the high concentration of CBD (11%) will ensure a peaceful buzz without the slightest adverse side effects. One of the finest strains for depression, anxiety, lack of sleep and a host of other mental health issues, Super Sour Widow will help you keep your mind off those destructive appetites.

Stephen Hawking Kush is a powerful indica strain with a high concentration of CBD. It has Harle Tsu and Sin City Kush as its parent strain. It can be an effective medication for chronic pain, tension and insomnia. A few puffs of this strain are enough to send waves of relaxation through each and every body part and the physical effects are complemented by a strong sense of euphoria.

Pennywise with its 50:50 ratio of THC and CBD is a highly sought after hybrid strain which will get you high without making you feel incapacitated. The primary effects of this strain are a quick mood elevation and a hint of cerebral high. It makes you feel calm, composed and relaxed and is also known to act as a good tranquilizer.

When it comes to cannabis and alcohol addiction, very few strains are as helpful as ACDC. Unlike what the name suggests, ACDC isn’t about a heavy metal experience. Its negligible level of THC (2%-6%) will make sure that you experience a full-body repose instead of mind-numbing psychoactive effects and therefore it can be safely used by people recovering from narcotics or alcohol abuse.

Before concluding it should be mentioned that marijuana cannot and should not be used by all recovering alcoholics. You should definitely consult your physician as well as your therapist before proceeding with cannabis therapy. Once you get the green light from your physician just select a high CBD strain and take the stress out of your life.

1 thought on “Can Cannabis help to Treat Alcoholism?”

PrevPreviousCannabis Strain for Nausea that are Effective
NextCannabis for Arthritis: What you should knowNext