15 Different Kinds of Weed Concentrates for 2020

15 Different Kinds of Weed Concentrates for 2020 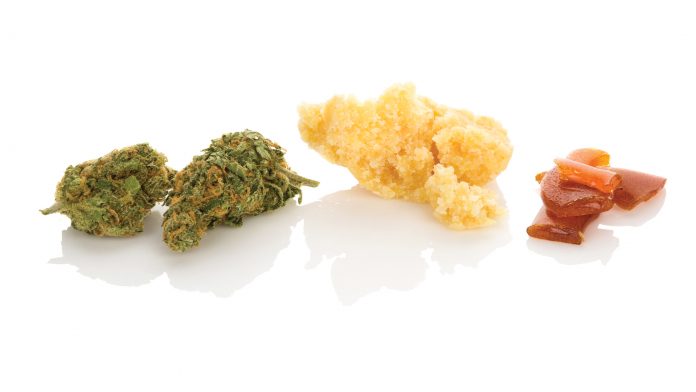 The best type of concentrate from cannabis is often reliant on your personal preferences and tastes. This means that the best concentrate can only be decided by you as the cannabis user.

Weed concentrates can come in many forms. This article tries to describe the 15 most common types of weed concentrates that people use. They have various uses and applications and some might be used differently than others.

What is a weed concentrate?

Weed concentrates are products that are made from the isolated biological compounds from the cannabis plant which are cannabinoids and terpenes. These compounds can be present in relatively high concentrations because the impurities and other inactive compounds are removed in the process. Some concentrates have THC levels as high as 95%!

Hash, as a cannabis concentrate, is made by separating the trichomes of the cannabis plant from plant material then coming up with a resin; this resin is formed into a coherent mass.

Hash can be smoked or can be eaten as an edible through decarboxylation. A lot of users recommend putting hash in edibles if you have breathing problems and generally want to avoid smoking. For example, putting a hash in brownies could make delectable hash brownies.

Trim run can be low on cannabinoids compared to other concentrates, but that doesn’t mean that it doesn’t contain any. The best way to assess a trim run is by smelling it. If it doesn’t possess a notable aroma, you’re probably only having the trimmings.

Trim run can give you a decent high but it doesn’t mean that it doesn’t come with downsides. It can for most of the time fall short on taste. It will give you a peppery taste due to the presence of chlorophyll in the concentrate.

The best thing about trim run is that it’s very affordable. It is very cheap on most retailers and online dispensaries.

Nug run, just like trim run, is used to describe a weed concentrate that is made from the nug part of the marijuana plant. Normally, these are nuggets of the buds and flowers of the cannabis plant. They are rich in cannabinoids and terpenes and are of high quality.

Compared to trim runs, a nug run is flavorful and can induce an intense high. This kind of weed concentrate is highly revered by connoisseurs since the taste cannot be matched. Another name of this concentrate is ‘the nectar.’ This concentrate can be expensive, to say the least.

Butane hash oil (BHO) is made with the use of a solvent, butane in this case, which extracts the cannabinoids and terpenes. Though the process may be simple, it can be very dangerous.

PHO is simply the same as BHO but it uses a different solvent, this time propane. Just about everything is just the same. One upside is that using propane could get more terpenes and fewer impurities than butane.

CO2 extracted concentrates are known to be solvent-free, mess-free, and extremely expensive. This is due to the highly trained technicians and specialized equipment needed to make these concentrates.

The product is entirely free from impurities and retains its terpene-rich flavor. Reiterating, CO2 is very costly, but it results in high quality concentrates that only serious makers venture into doing.

Dry sift concentrates often have a powdery texture to them. The dry sieving extraction method is exactly alike with grinding. Buds and other plant material are passed through a dry mesh by rubbing it in. Trichomes, the hair-like particles which are the reservoirs of most cannabinoids and terpenes, are collected underneath.

Dry sift concentrates can be smoked or vaped directly, but it could also make other concentrates.

Full melts are a hash derivative that is made through a water and ice or dry sieve process. The end product will always be top-notch in spite of whatever method you use.

Its texture resembles an intermediate between sand and brown sugar, but it’s extremely potent. With full melt, you can expect the highest levels of terpenes and cannabinoids. That’s also the reason why full melt is quite rare – it’s free of any impurities.

Full melts are best used by vaping it or using a dab rig.

Shatter has gotten its name because it resembles glass when you drop it. It’s usually made from BHO and PHO extracts and has high levels of both CBD and THC.

Despite the name, shatter is extremely pure, but different variations also exist. Visually examining a piece of shatter for quality can be tough. It can be clear but has a lower THC and CBD content or the other way around. If you’re buying from established manufacturers, its cannabinoid content will most likely be at around 80%

Shatter has an extremely high evaporation point. Normally, you would need a butane torch to reach those high 600 F temperatures before you could vaporize shatter.

Another butane hash oil weed concentrate derivative is crumble. BHO is purged in a vacuum oven for some time at low temperatures. During that process, crumble becomes soft but can still be crumbled.

Because of this consistency, crumbles are usually vaporized. This concentrate is also potent since it contains a lot of THC and other cannabinoids.

Wax concentrates are called due to their resemblance to honey. Even if you’re new to concentrates, wax can be easy to identify. BHO and PHO are often considered as types of wax.

You need proper equipment to handle this concentrate and they are up to 4x more expensive than buds.

Saps have textures that are similar to chocolate, which is difficult to handle in hot temperatures. If you’re in a tropical area and the room temperature is hot, it will melt. It is generally recommended that you work indoors with this concentrate.

Because it can melt quickly, handling it with your bare fingers is not plausible. You would need specialized equipment to handle this.

Just like wax, if you’re new to this it’s best to start low and go slow.

If you want to use small amounts of this concentrate, just pull and snap your desired amount. You can then vaporize or smoke this.

Resembling the consistency of butter, budder may be the cleanest and most sought after concentrate on this list. With a THC content ranging from 90-99% on average, it’s extremely potent.

It’s extremely difficult to make and is expensive.

RSO is widely known for its medicinal purposes. Unlike other concentrates buds and leaves are both used. This means it has a high THC percentage and the user can experience various psychoactive effects.

RSO is usually administered sublingually where it can be rapidly absorbed. Alternatively, it can be ingested or vaporized. Most users recommend that you dose yourself on the low-end before titrating.

Finding the right concentrate depends on you. It’s always up to your personal preferences. Whether you like it or not, you need to try different concentrates for you to find the best one for you.

PrevPreviousWhy CBD is a Trend and What Is It?
NextUnderstanding Medical Marijuana: Laws, Uses, SafetyNext