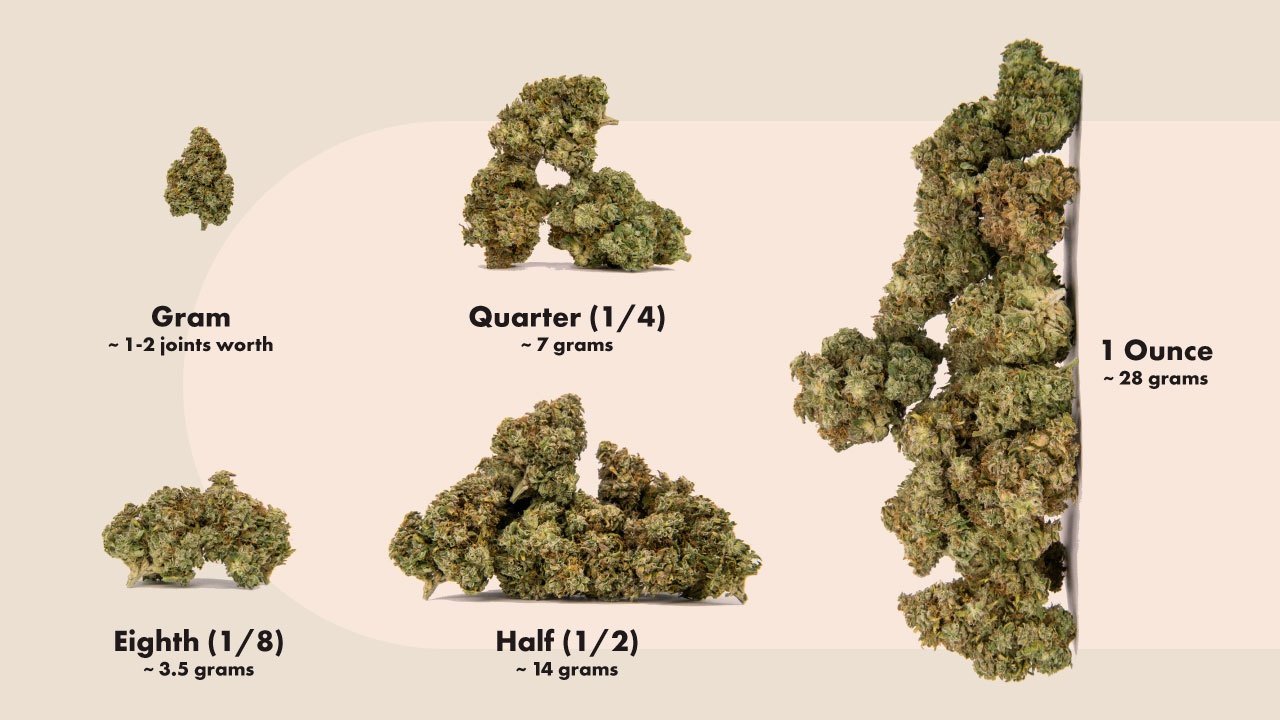 What does cannabis look like? A visual guide to cannabis quantities.

If you are new to marijuana, you may be surprised that math is essential taking the right amount of cannabis quantities is essential.

Use this guide to find the right amount for your intake. Weed measurements are explained in simple terms.

Cannabis is commonly measured by ounce. But, smaller amounts of cannabis are for sale, measured via grams or, you can buy bilk at a times.

Just like an eight of on an ounce (1/8 of an ounce or 3.5grams) if bought, it is generally cheaper than buying three separated grams of cannabis.

Of course, you can buy large amounts of marijuana but once you get past an ounce, it becomes illegal in many states and also cost-prohibitive.

Today, many states allow consumers to buy and possess up to one ounce of marijuana

The prohibition of marijuana possession only applies if a consumer carries more than an ounce of marijuana, but it does not outweigh the benefits of purchasing cannabis.

If you still don’t know how to measure your cannabis, then read this to get some general knowledge about how the cannabis trade works.

When it comes to cannabis, the gram is your base unit. A gram is good for two medium-size blunts or several joints.

Well, a dime bag is the smallest amount you can purchase anywhere, as mentioned before, it is the standard for the cannabis trade.

This is also true to other weed measurements guides, sometimes, it depends on the regions, and native terms can be used to substitute the smallest amounts of cannabis that is available to buy.

How much is a dime bag?

In Canada, the price of marijuana is dependent on the place where you live. It was said that an average gram of weed in the black market

In Ontario, Michael Amlung stated that the weed prices in Ontario range from $10-$14.

In British Columbia where marijuana is available online and in licensed store, the price of cannabis ranges from $6.99 to $16.28 per gram

The Dub of Bud

Commonly, dub is two-gram cannabis. Depending on where you live, its actual qualities vary. But the weed measurement guide standardizes the dub to be two grams of cannabis

The price of the dub varies in the place you live in. commonly, dub refers to any bag of cannabis that is usually sold at $20.

In Canada, the highest quality of medical dub you can get at a licensed retailer can be bought around $32.50 and for recreational, you can buy dub at $9.25 on an average.

In some states, some will be cheaper and others tend to be expensive because taxes are heavily dependent on the price of legal marijuana.

A dub is certainly bigger than a gram of weed. A dub is comparable to a two size of two large buds of marijuana in this weed measurement guide. You can make five or more joints or some blunts.

Maybe you can’t feel the benefit of the bulk discount on dub, but getting an eight is another story.

An eighth of an Ounce

So this means that and eighth contains 3.5 grams of cannabis.

How much is an eighth of an ounce?

In Canada, in this weed measurement guide, legal medical cannabis retailers sell their eighth around $ 62.75 and around $ 56.56 for legal recreational marijuana.

In comparison, you can save money on buying an eighth compared to buying three separated grams of cannabis.

Traditionally, the name of the amount of cannabis is equivalent to the mathematical name for them, but others use slang to refer to an eighth.

There are some names you can describe an eighth like slice, half a quarter, cut and eify regionally.

Let us double the eighth and we get a quarter. A larger amount of cannabis available in the market. A staple by those who prefer to buy in bulk and for those who love their weed.

If to visualize, you can make about 10 blunts or roughly about twelve to fifteen joints with a quarter.

How much is a quarter of an ounce?

As always, there is no fixed price in the cannabis market.

Depending again on the quality and where the buyer is, the price of a quarter varies but commonly around $50 to $70.

The price of half an ounce?

In Canada, legal dispensaries offer $106 for a half an ounce medical cannabis and $90 for recreational weeds.

In this weed measurement guide, you can get an ounce of medical marijuana in Canada for $183 and $182 for recreational.

The biggest amount you can buy in Canada is a pound of weed. Which is mostly illegal in other states.

For people who just love to smoke their weed and for those who love bulk buying.

A quarter-pound of recreational cannabis is sold at $450 and $ 500 for medical marijuana.

And the last one, the biggest of them all, the one-pounder.

One pound of medical marijuana in Canada is available for

In short, the name of the cannabis increment is mostly based on their mathematical counterpart.

The price is greatly dependent on the tax regulation and the quality of the weed.

In the cannabis world, the bigger you buy, the cheaper it is, it is due to the bulking discount which causes the cannabis to be sold in grams to be cheaper if bought in bulk.